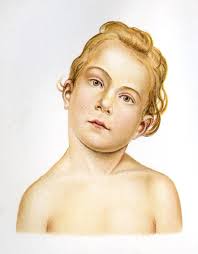 Torticollis, also known as wry neck or loxia, is a symptom defined by an abnormal, asymmetrical head or neck position, which may be due to a variety of causes. The term torticollis is derived from the Latin words tortus for twisted and collum for neck.

The etiology of congenital muscular torticollis is unclear. Birth trauma or intrauterine malposition is considered to be the cause of damage to the sternocleidomastoid muscle in the neck. This results in a shortening or excessive contraction of the sternocleidomastoid muscle, which curtails its range of motion in both rotation and lateral bending. The head is typically tilted in lateral bending toward the affected muscle and rotated toward the opposite side.
The reported incidence of congenital torticollis is 0.3-2.0 %. Sometimes a mass, such as a sternocleidomastoid tumor, is noted in the affected muscle at the age of two to four weeks. Gradually it disappears, usually by the age of eight months, but the muscle is left fibrotic.
Initially, the condition is treated with physical therapies, such as stretching to release tightness, strengthening exercises to improve muscular balance, and handling to stimulate symmetry. A TOT Collar is sometimes applied. About 5–10% of cases fail to respond to stretching and require surgical release of the muscle.