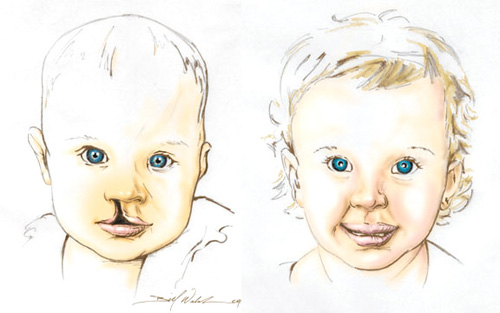 Before birth, there are natural structures that form in the body and then join together (fuse). A cleft is a non-fusion of these structures – a fissure or a gap. In this case, the gap (cleft) occurs in the upper lip, the palate (roof of the mouth), or both. When just one side of the lip is affected it is called a unilateral cleft; a bilateral cleft affects both sides.

A cleft lip or palate can be effectively corrected with surgery.

A cleft lip is clearly visible when the baby is born, whether it be unilateral (just one side of the lip) or bilateral (both sides). The baby will have a slash in the lip. Sometimes the gap (cleft) may be in the upper gum, palate and even reach the nose. In rarer cases the cleft goes right to the back of the mouth – but the length of the gap may not be evident straight away.

A cleft lip/palate can cause the following problems:
Dental problems
Ear infections
Feeding difficulties
Hearing loss – mainly due to complications of ear infections
Self confidence
Speech problems
How is cleft and lip palate diagnosed?
Diagnosis used to be done purely after a physical examination at birth. However, nowadays obstetricians can diagnose facial clefts while the fetus is still in the womb (uterus) – an ultrasound examination at 18 to 20 weeks of gestation can identify a cleft in a fetus.

What causes cleft and lip palate?

During the embryo period (first 12 weeks) the development of the skull occurs. Two separate plates of bone and tissue are formed, and gradually move towards each other and join (fuse) at the mouth and nose to form the skull. If this fusion is incomplete the child will have a cleft (a gap) in the mouth/nose area.

Scientists have identified some genes that make a human more likely to have a cleft than others. Although the majority of parents with clefts do not have babies with them, a majority of babies with clefts have a parent or close relative with a cleft – in other words, clefts generally run in families. The following factors may also increase the risk of having a baby with a cleft lip and/or palate:
The mother smokes during pregnancy
The mother consumes over 10 units of alcohol per month
The mother is obese
The mother did not receive enough folic acid during her pregnancy

Surgeries of cleft and lip palate

Cleft lip and/or palate is effectively treatable with surgery. The type and severity of the cleft decides what treatment is recommended.

In most developed nations the patient (a baby/child) is monitored by a cleft palate team or craniofacial team right through into adulthood, and sometimes throughout the individual’s life.

Some doctors prefer to wait on jaw correction until the child is ten to twelve years old, so that all milk teeth have gone and the adult ones are in place – this saves the child repeated corrective surgeries. Others may choose to carry out correction of the jaw earlier, arguing that speech therapy is less effective when the patient is older.

Treating cleft lip – the cleft lip is usually surgically closed within two to three months of the baby’s birth. In 1969 Wilhelmmesen and Musgrave coined the phrase rule of 10s – the baby should receive surgery for cleft lip when they are at least 10 weeks old, weigh 10 pounds or more, and have at least 10g of hemoglobin. If the cleft is bilateral the first surgical procedure may focus on one side, and then another surgery a few weeks later corrects the other side.

Sometimes the same type of surgery is required for incomplete cleft lip repair as for complete cleft, because the muscles needed to purse the lips go along the upper lip and a full incision must be made in order to restore the complete group.

After surgery the child should be able to recover his/her speech.

Surgeons today are much better at doing this procedure with the minimal of scarring.

Further surgeries later on in life to improve facial appearance may be required.

Treating cleft palate – sometimes the cleft palate is covered by a prosthetic device made to fit the roof of the mouth, covering the gap (palatal obturator). Surgery is also an option, which is typically carried out when the baby is from 6 to 12 months of age. In approximately one fifth of cases the child only needs one surgical procedure. More often than not, though, the child will need a combination of surgical methods and subsequent operations as he/she grows. The Latham Appliance has become more commonplace in cleft lip and cleft palate repair. The device is surgically inserted when the child is about 4 months old; a screw has to be turned daily to close the cleft to assist with future corrective surgeries.

If the gap (cleft) reaches the maxillary alveolar ridge, the fissure is filled with bone tissue, which is taken from somewhere in the child/s body, such as the hip.
Speech and hearing

A grommet (tympanostomy tube) may be inserted into the eardrum in order to keep the middle ear aerated. Grommets also help hearing.

A speech-language pathologist can help solve speech problems. The child may need surgery, such as pharyngeal flap surgery or augmentation pharyngoplasty to reduce the amount of air that escapes through the nose when the child speaks. The speech therapist may also help the child correct pre-operative speaking habits.
Psychological issues

The likelihood of being teased or bullied at school is much lower today because of effective and prompt surgical procedures that occur in developed countries and several middle-income nations. Even so, the child may need encouragement to interact with other children from an early age. Children may ask questions regarding any visible evidence of cleft lip/palate – the child should be told in straightforward terms what a cleft lip/palate is, so they can pass this information on to their friends when they ask.

If the child’s condition results in hearing and speech problems, it is important to liaise with the school. Such simple things as making sure he/she sits at a strategic part of the classroom are important.

Children with cleft lip or palate tend to have more dental problems than other children. The ridge of bone that supports the upper teeth and gums (alveolar ridge) might not develop properly. The child may need orthodontic treatment (dental braces).

Tooth decay is more common among children with cleft lip and/or palate. Good oral hygiene can help reduce the risk of decay and dental problems.