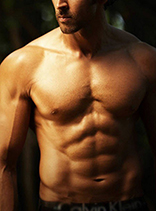 Abdominal etching is a technique of sculpting to emphasize the appearance of the vertical muscles in the center of the abdomen, the “rectus abdominus,” commonly known as the “abs.” By sculpting the abdomen to emphasize these muscles, it gives the appearance that one is incredibly physically fit; in order to produce the same effect by working out you would probably have to work out three or four hours a day every day, and in addition keep your body fat very low.

Abdominal etching is a liposuction procedure designed to contour the abdomen and waist for male patients to maximize the athletic appearance. Depending upon how thick the layer of tissue over these muscles is, the procedure is usually accomplished by sculpting the overlying tissue to the shape of a healthy “six pack.” If the layer is too thin, it may also be necessary to do some micro fat grafting over each section of the six pack.” This enables us to emphasize the muscular appearance even more.

The procedure is simple and is usually performed in less than one hour under local anesthesia. While the patient is asleep, fat is selectively removed through a small hollow tube inserted through one or more tiny incisions. Most of these incisions are hidden in the pubic hair and in natural creases of the body leaving only very small scars. The abdomen is suctioned to thin the fat pad, then more aggressively over the external obliques, lineal alba, and transverse inscriptions. This technique reveals and enhances the muscular contour to achieve a more athletic appearance. Recovery is usually 3 to 5 days and patients usually are back to workouts within a week.

The procedure does not interfere with the function of the muscles in any way, and you can resume your workout within a week or two, depending on what other procedures are done.

One of the really nice things about this is that the procedure itself results in a bit of swelling, and the “six pack” appears only gradually as the swelling subsides, very much as it would appear gradually if you began working out vigorously. It does not change overnight so it would look to anyone else in your gym like you were doing this on your own.

Male abdominal etching is not a substitute for weight loss, and the best candidates are of relatively normal weight with isolated pockets of fat that do not respond to diet and exercise.

During pectoral etching, targeted Vaser Liposuction is used along the lower and outer edges of the chest muscles. A modest fat pad is left over the pecs, creating a noticeable contrast outlining the muscle.

Many patients who want the procedure suffer from minor gynecomastia or have lost weight but still have a more feminine-looking chest. Other patients are serious athletes that, despite working out and eating right, cannot develop the masculine, muscular chest they desire. To get a balanced look, these patients often have both abdominal and pectoral etching.